After an absence of several years, the Ballarat Brass Band made a return to the historic Royal South Street competition this year, competing in the VBL State Band Championships on 17 August.

There were seven bands in our division coming from all across Victoria to compete.

Our band put in many hours of practice leading up to the competition. At one of our practice sessions we had the privilege of being conducted by the Graham Lloyd, who is a well known conductor and composer who wrote the test piece we played on the night, Prelude For A Festival.

We put in a really solid performance and were lucky enough to be judged the best band on the night. There were so many great performances on the night that it was a real honour to take out top spot.

Here’s a photo of our proud MD Mark Smith with the trophy we won at the contest. 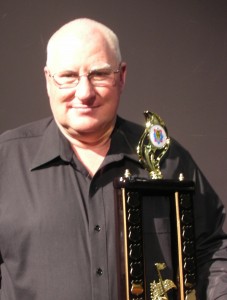 Mark with the trophy

Our highest rated piece for the night was our march, Castell Coch, which scored a 45 out of 50 from the adjudicator.

Here’s the audio of our band playing the song:

Full results for the night can be viewed here.